In my last blog I went over my planning process and the beginning stages of this construction. In this blog I will be moving into the creation of the rock work and the snow sheds. Getting the rock faces looking as realistic as possible was daunting to me as my standards have increased but my abilities have not. Realism for me meant that the rock formations had to resemble what would really happen in nature. I specify a difference here because a rock face can be created to look realistic on a model railroad, however, they may not seem quite right when compared to a true rock face. This difference had puzzled me for a while, it wasn’t until a geologist approached me at the past train show and said “Would you mind telling the owner of this module that his rock face is geologist approved?” Needless to say, the man was very impressed by the structure of those rocks. They were at roughly a fifteen degree angle and followed that pattern across the entire face, just as rock would in nature. Now by no means am I good enough to recreate that incredible rock face from the train show, however, it did open my eyes to the way actual rock is structured. This gave me good direction for tackling the rocks of my tunnels.

WARNING: When working with plaster, do not pour any of the plaster filled water down your sink. The plaster could       settle in the pipes and harden, quickly leading to a permanently clogged pipe.

To begin, I gave the entire length of the route a layer of plaster cloth. This plaster cloth made it easier to apply the plaster rock work. Plus it covered over any gaps in the foam which would otherwise fill with plaster and be a waste of said plaster. Plaster cloth is very simple to use and it creates a clean white surface to work with. To use plaster cloth, cut out a section roughly the size of the area you wish to cover, then place the piece in a shallow bowl of water for 10 - 20 seconds. With the cloth thoroughly damp, apply it to the surface you wish to cover and smooth it out. The holes in the cloth should fill when smoothing out the wet surface but if they don’t it is not an issue. Once the cloth has dried, you can do pretty much anything to it, paint it, apply ground covering, or in my case cover it in rock work. 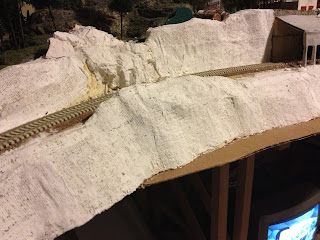 With the plaster cloth covering the entirety of the Thompson River route, I began construction of the seven concrete snow sheds. The sheds are being cut from 1/4” balsa sheet which is easy enough to cut with a hobby knife and a dremel. The sheds are designed fairly simply, they consist of a front face with rounded rectangular openings, large end walls that keep rock from reaching over the edge, and a few other small structural additions on certain sheds. With my version of sheds I have compressed them significantly to fit my space, this meant shortening the sheds, lowering the end walls, and omitting the triangular shape of the front wall supports. With the wooden shed pieces cut out, I glued them together and onto the layout with white glue, then gave them a thin, smooth layer of plaster to replicate the concrete look of the prototype. 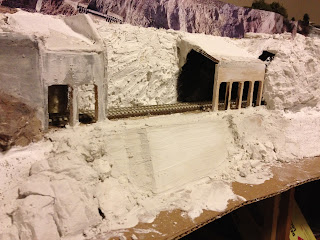 Now that the sheds have been put in place, I could begin the rock work around them. This process was quite hit and miss and I wanted to try to incorporate a unified slope into the rock face. Another detail I tried to include were fairly large recessions in the rock. The contrast between large outcroppings of rock and deep reliefs create a dramatic rock face. To get large detailed rock outcrops I used a Woodland Scenics [1] rock molds, this ensures a very good looking cast every time; something that I could not have done by hand. With a good number of these large rocks cast in plaster, I used more plaster to attach the castings to the mountain face. To make sure the casting do not fall off, I put a lump of plaster on the back of the casting and then quickly push it against the plaster cloth. This will not hold it well though, I had to work plaster around the casting to lock it in place and blend the rock into the rest of the mountain face. When applying the castings and other plaster to the mountain, I prefer to keep my batch of plaster small because otherwise it will dry before I can make use of it all. The best consistency for attaching the castings is where it can be scooped out and remain in a lump, just past its liquid point. The latest point in plasters drying stage, where it is very clumpy and almost beyond use is the best for applying right to the mountain face to create rock without a mold. Lastly, before the plaster applied to the mountain face has hardened, I like to dab all of the new plaster with my fingers to rough up the surface, getting rid of any smooth spots. 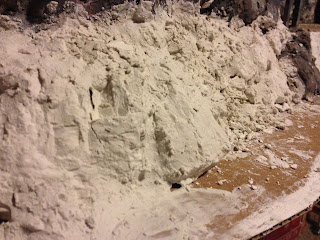 Now for the tough part, repeating this process along the entire length of the route. It will certainly take time and a fair mass of plaster, however, that’s the fun of it all. As it stands, my Thompson River route has a third of its rock work complete, with three out of the seven sheds built. Hopefully by the next blog they will be complete and photos will be included. Along with that I will explain my process of painting the rock faces and sheds, as well as some little details I’ve been adding to the trackside.

This is by Tyler Fedoroshyn one of the great staff at Chinook & Hobby West
Posted by Chinook Hobby Talk at 15:43 No comments:

An HO Layout In Progress

This layout is by Tyler who works at our South store.