My dad came to tell me (morning of July 5/12) that instead of going to my Nana's with my sister for the day, I will be coming to work with him and my mum at Chinook & Hobby West, our hobby store.

I usually only get to go to the store to help my parents on Fridays so I was super excited to get an extra day at the store.
On our way to the store Daddy and I stopped at Walmart where he bought me a pair of steel toed work boots." I was very confused and asked him where we were going that I needed these boots? He said 'Its a surprise, you have to wait until 3:30 this afternoon'.

I am 9 years old I am not good at waiting for surprises; back at the store I asked my mum "where is Daddy taking me today?", and mum said 'I'm not sure, Daddy has a surprise for you', aaahhhhh this is driving me crazy.

After I had my crazy moment I went to go help Dad and Jesse sort out Diecast cars for the North and South stores.  After sorting, I had lunch and after lunch Daddy said 'Do you want to know where we're going today - just you and me?' I said "yes, yes, yes please!"

He said 'We're going to the CP Rail Yards to see #2816 and that's all I'm going to tell you right now'.  I was so excited I nearly exploded!  Then we talked again about what time we were going and Jesse was eavesdropping on what Daddy was telling me, Jesse said "So where are you going?" and Dad said "Well, we kinda got an invitation to see 'The Empress' at the CP Rail Yards." And Jesse said how lucky we are and asked if we could take him. Dad said the invitation was just for Dad and me only, not even my mum could come.  Daddy commented on how ticked off Jesse was that he couldn't come.

We finally arrived at the yard parking lot, and Dad called John, the engineer of 2816, and let him know we were there so he could bring our hard hats, safety goggles and safety vests. 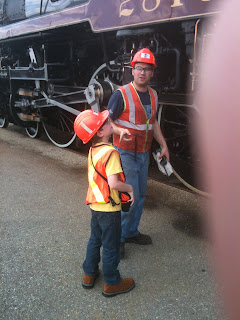 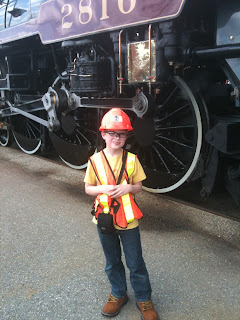 
After meeting John, he took Daddy and I to see 'The Empress' (2816). John asked me 'Do you know how a steam engine works?'. And I said, " Yes, I do know how a steam locomotive works!" Then I started explaining it all to him and you could see on his face he was really surprised with how much I knew! His mouth came open!

Then John said it was time to check out the cab of the locomotive. He showed me how to climb in. You had to put your foot on a high bottom step, then hold the side bars tightly and climb up the ladder into the cab.

Then when we got into the cab it was bigger than I thought it would be (to be fair I've only seen cabs in my DVD movies and on my model trains).  Next John told Jim how much I knew about steam locomotives and then Jim said "He can't know what our jobs are?" and I said "As a matter of fact, I think I do".

I said to Jim you apply the brakes and watch for things on the track, and John drives the train forwards and backwards with that steering wheel thingy" (it does look like a small sized car wheel), Jim looked surprised. 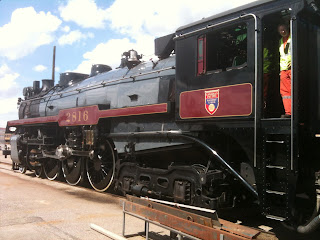 Jim looking out of the cab 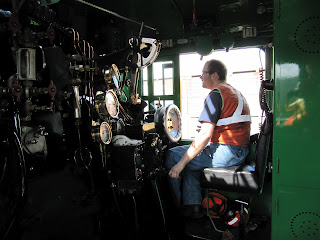 John at the 'steering wheel thingy'

In Part 2 I will go over some of the things I learnt about the inside of the cab.  See you next week!

Posted by Chinook Hobby Talk at 16:32 No comments:

It seems that there are an increasing number of people wanting to get into modelling (model kit and diorama building) these days. Most of these are people that built kits years ago and some are first-timers. Their skills may be rusty or non-existent. We would like to assist you with helpful suggestions on building, painting and detailing.


Many models, even cars, can be put into a simple diorama setting adding a new dimension to your modelling skills by adding a story. For example, you just finished a car model and you put it on your shelf. Nice. Now picture it sitting on a piece of thin wood painted in a tarmac or concrete colour, paint in 2 yellow lines and you have a parking lot. This sets the car off nicely, and it was simple to do.


You could just as easily make a roadway base. Add some Woodland Scenics dirt and grass and you have a country road.


This idea of putting your models into scenes is where modelling and trains (building model railway layouts) meet. Both use the same materials and skills. A model train layout is basically just a big diorama, just a little more work & imagination.


As a hobby shop host for our guests, it is not only our responsibility to provide the materials the modeller needs but to provide the knowledge on how to create the effect they are looking for. There are the basic techniques and materials that are commercially available but we have found over the years that many modellers have found other ways to create using different ideas, many of which have nothing to do with traditional modelling.


We invite any modeller that has different ideas and/or techniques to share this with other modellers by emailing your idea or YouTube video so we can post it with your name (if you wish). We also invite train modellers to share what the have discovered over the years. The more knowledge you have, the more enjoyable modelling is.

~~This post is by Al B. at our South store. He has been doing various model and diorama builds for over 30 years. This blog is his opinion on how he views modelling.

Posted by Chinook Hobby Talk at 20:54 No comments:

How To Build Creative Dioramas

What is a 'Diorama'?
A diorama is a highly detailed presentaion of a real life or imaginary scene. They come in all shapes and sizes and can be used to enhance the appearance of a model to a telling a 'story'.


How To StartYou must decide on a base and theme first.
If you are doing a diorama of a scene (like the one pictured to the left) starting with a styrofoam base is the best. You can carve into it, stick things into it, build up on it with plaster or paper mache and its light weight so you can carry it a little easier
If you choose to do a car diorama to accent a model you have built you could choose wood. You can cut your own base or get a precut plaque style to build a small scene onto.
Answer one last question before you start: "What am I planning to do with this diorama once I've finished it?"
If you're building for a contest, get the rules ahead of time; some contests limit the size of entries.  A diorama that will serve as a display base for the completed mosels on your shelf at home needs to fit the space.  Construct your diorama so it will be well built to when you move it, it will last.

By Valerie Gale
~This blog is inspired and quoted from 'How To Build Creative Dioramas For Your Scale Auto Models' by Ken Hamilton ($14.99 cdn at our stores)

Posted by Chinook Hobby Talk at 11:00 No comments:

Do You Collect Toys?

Being in retail, I have noticed that the Action Figure Collector market has really changed this past year. The 3 3/4" collectors are shifting their focus choosing to buy figures that are loose instead of carded or boxed.

This could be because of price, or the fact you see what you get. In our house its so we can make dioramas and when the kids play with them we are not so worried that it cost 'This Much' and they may break it. With the magic of an 'O' ring or two and some 'Speed' brand superglue, they're fixed!

The 12" market is changing too. The manufacturers seem to be sticking mainly to the figures they know have sold in the past and just retool them slightly and re-release them.  Do we really need 13+ Iron Man 12" figures?

Now don't get me wrong, yes I'm sick of them bringing out the same Clone Trooper with a different colour on his armour - but they are all super detailed and articulated and pretty cool.  The little details can really make some figures really neat to display!

Perhaps if these companies listened to the customers they poll at the conventions these manufacturers would find more unique and origianl ideas for figures that would rekindle the collectors passion.

~This is the opinion of this person only and does not reflect the opinions of Chinook & Hobby West
Posted by Chinook Hobby Talk at 16:38 No comments: