Now that I have been getting back to work on this project, there are some new things to write about. Since the last blog I have done a section of ground cover, completed ballasting the mountain stretch, and completed the river below. I think most will agree that largest challenge behind this list of tasks was ballasting. Ballasting is a skill which often takes us several attempts to get good at. However, there are ways to fix a poorly ballasted section of track, you can usually add a thin top layer if it comes out lumpy or pull out the bad section with a hobby knife.

The ballast I have used on this project is Woodland Scenics [1]  medium grey blend. Being a grey blend, this ballast has a mix of light and dark grey rocks, relatively appropriate to the location I am modelling. The first step for many is to apply a coat of rail brown paint to the track and ties. The rail brown gets rid of the unrealistic silver shine of the rail sides and weathers the ties; especially if the ties were black. When applying the paint, whether by airbrush or paintbrush, be sure to wipe all of the paint off the top of the rails before the paint dries. In the case of concrete ties, the colour is meant to stay light grey so a full spray of rail brown would ruin their look. Instead, I will be ballasting first and then using a paint pen to coat the sides of the rails and the loops holding the rail to the ties.


When ballasting, the first step for me is to pour out an approximate amount of ballast onto the track, working in small sections at a time. With some ballast ready to be leveled out, I take a wide paint brush and gently brush out the centre of the track. This will still leave pieces of ballast on the ties but do not worry about those yet, they will be brushed off on the later steps. With the centre roughly levelled out, I use the paint brush to push away and level the sides to roughly the rail tops. Once the ballast along the entire area is level with the rail tops, I use a piece of cardboard to push down the ballast on the ends of the ties. This will not expose the tops of those ties completely but it will compact the ballast and make gluing easier. The next step is to run my finger along the ends of the ties to clean the rest of the ballast of the tops. You could use a paint brush for this step, however, I have found that a paintbrush likes to throw ballast back up onto the ties and the bristles get between the ties which clears too much ballast out from between them. A paint brush is less destructive to your finger but I have simply had far less frustration and far more ease with using my fingers. The same trick works well for cleaning the centre of the ties. Once all of the ties have been cleared of any ballast on their tops, I then us the piece of cardboard to press a nice slope into the sides of the ballast, this technique gives a very clean and level look to the ballast. 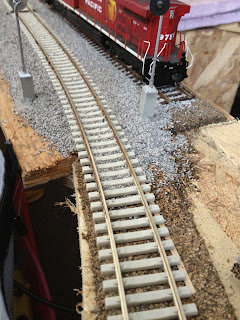 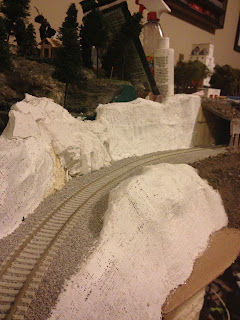 Now, the critical point in ballasting track, gluing it down. This process can be detrimental to the perfect look of your newly laid ballast. The problem is that due to dust and oil on the surface of the ballast particles, water and glue does not like to soak in and adhere to the ballast. Instead, it will clump up and force the ballast around leaving it anything but clean and level. To get around this problem, first apply a generous number of sprays to the ballast with a mixture of water and a few drops of dish soap. The dish soap will allow the water and glue to easily cling to the ballast. The glue I like to use is a 50/50 mixture of water and scenic glue (or roughly a 3/1 mixture of water to thick white glue). With my glue concoction ready, I use an eye dropper to apply a good amount of glue to all of the ballast. Since the ballast was pre-soaked with water the ballast will run into the ballast evenly. The only other thing to be careful of is putting too much pressure onto the eyedropper, the wet ballast is very easy to push around which means to much pressure behind the glue stream will create unwanted troughs. Once the ballast has been thoroughly soaked with glue, allow it a day to dry and it should be solid to the touch. 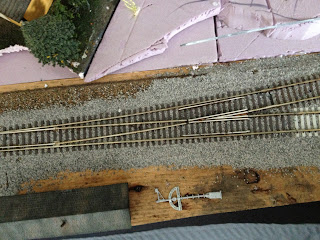 The next thing I will explain is ground cover. For this project I will not be using much grass and foliage as the prototype is almost barren as well. It will mainly consist of dirt and rock, all of which was collected from a near by forest. I started by covering the steep banks in a layer of fine dirt. I applied a layer of white glue to the bank and ran dirt down from the top, this eventually covered the entire bank and because it was run down from the top I got vertical streaks just as the prototype has. Next, I created piles of larger rock along the river's edge and on any level points on the bank. The glue mixture used for ballasting works well to seal in the ground cover. One exception being any rocks larger than half a centimetre in size, these should be laid on top of a layer of thick white glue. I then added some other small details along the river bank. Small branches from deadfall make great driftwood stuck in the rocks. The occasional pieces of ground foam (grass/bushes) can be added to gaps in the rock where dirt can collect and grow plants. A spray from the water bottle and a generous coat of glue concoction will seal in all of the ground cover. 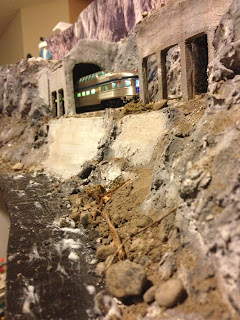 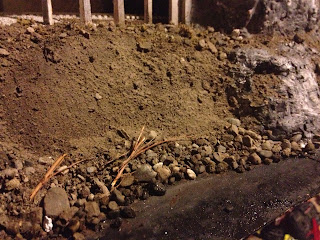 The last element of this project that I will discuss in this blog is the river. This was a relatively simple addition which consists of some paint and Woodland Scenics water effects [2]. First I start with a light grey/brown shade of paint along the river bank, followed by increasingly darker shades towards the deeper points in the river. With the landscape I am modelling I expect the river bank to drop off pretty quickly and go to a significant depth, so there is very little light colour along the bank before going into a black centre. Once the paint has dried, I squeeze some water effects paste onto the surface of the river and spread it out with a wide paint brush. This is where some creativity and maybe a photo of a rushing river will come in handy as you spread out the paste to resemble the waves bouncing off rocks and rapids in the river. Lastly let the water effects dry and you will be left with a clear but three dimensional flowing river with realistic depth. 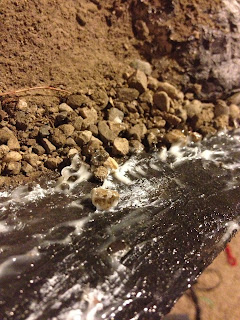 That sums up this blog, the project is starting to take shape nicely and is fun to just look at now. Next time I will discuss weathering the track work beyond painting rails and will hopefully have some work done on the fictitious town to share. As a little bonus project I will talk about the signalling I have just installed with a makeshift system to operate them automatically.  ~~Tyler Fedoroshyn

Please leave your comments!
Posted by Chinook Hobby Talk at 13:11 No comments: