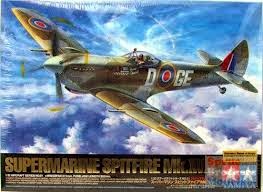 Fall is here and its time to start thinking of long term winter projects that we can do in our warm hobby area. One of our guys, Al, is a long time model builder and has recommended this kit (over 400 pieces).


This item is an injection-plastic aircraft model kit. 30cm long when completed.
Tamiya adds to its selection of magnificent 1/32-scale Spitfire kits with this release of the Mk.16e! Features a beautifully rendered Packard Merlin 266 engine, easily seen with the removable magnet-attached cowl panels, plus an accurate bubble canopy and distinctive clipped wings. Includes three marking variations, photo-etched metal detail parts, and self-adhesive canopy masks for painting. The included reference manual (with images) is in Japanese, English, French and German!

We came across a couple of reviews for this model:


A bit of history on the real machine:

Although initially conceived as a stop-gap measure, the Spitfire Mk.IX and the essentially similar Mk.XVI (powered by a Packard Merlin engine) eventually became the most numerous of all Spitfire variants with more than 7,000 delivered to the RAF, the VVS and other Allied air forces.

The Packard Merlin Mk.XVI was fitted with revised armament where the 20mm cannon was relocated to the outboard position. This was known as the E wing, and was also fitted to some Mk.IX variants.
During the production run of the Spitfire Mk,XVI, a low-back "bubble" canopy version was introduced.
The camber of the main wheels was changed on the Mk.XVI, necessitating a shallow bulge on the top of the wing to accommodate the tilted wheel in the undercarriage bay.
The Spitfire Mk.XVI continued in front line service until the end of the Second World War.
(partial source)

Check out our great hobby Tools to help complete your winter hobby project:

Posted by Chinook Hobby Talk at 18:15 No comments: